Dads spark joy when they create memories for their family. It’s one of the great privileges of fatherhood. If you’re a dad, it’s what they’ll talk about at your funeral.

I saw a memory created by four fathers working together on a recent Monday. Let me set the context first. No one can remember exactly when the memory happened for the first time. But I have photos of it from six years ago, and by then it had been going for several years.

The first two years came as a surprise to the kids, but each following year they knew what to look for. They became much more cautious walking down their driveway looking for their assailants. As the years went by, more advanced water weapons took over. AK-47 look-alikes with large water capacities became the method of choice. It also became more challenging for the parents to hide out of sight before the ambush. Last year, for example, they hid in the garage before the water attack began.

Fast forward to early June 2020. The Saturday before this year’s Monday memory we got together with the family, and the grandkids, among other things, talked about the last few months of online school because of the pandemic.

The twins, Grant and George, are seniors by now and were especially hard-hit by the abrupt end to their in-person high school education. They’re both excellent students, as well as great tennis players. Their three years of competition experience and extra training in the off-season were supposed to culminate this spring in their best season ever. They never got the chance when school shut down in March. (My blog post from last week, June 17th, talks about losses most graduating seniors are experiencing.)

As our family talked about how different school was this year, I think it was George, who said in a dour disappointing tone, “I guess because of how school is ending, we're not going to get squirted like every other year.” Little did he know what was going to happen in just a few days.

Then on Monday, George drove his brother Grant and sister Eleanor, back to school for the last time to get handed to them all the contents of their lockers they had abruptly abandoned when the stay-at-home order went into effect in mid-March. They couldn’t even enter the building and walk the halls one last time.

So they drove home, and as they got closer to their house they saw something very odd. Two large firetrucks were parked in front of their house. It didn’t seem like anyone’s house was on fire. But as they slowly turned into their driveway, that’s when it happened. That’s when the tradition that began over a decade ago in their early elementary school years resurrected one more time.

As they pulled onto the driveway, one of 3 firefighters unleashed a barrage of water from his fire hose onto their car. The kids waited for the spraying to stop before they got out. But then the water came flying at them again. They were doused in water. And doused with the joy that at least one thing they thought was lost because of Covid-19 was not lost after all. 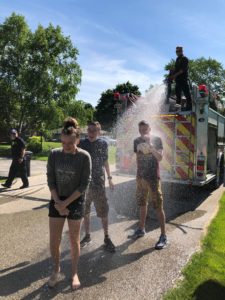 So how did this happen? My son called the local fire chief the week before, told him about the tradition, how school was not ending as it always had. He asked the chief if he would be willing to see their family tradition continue by sending over a fire truck and spraying his kids with water from a fire hose.

“What time do you want us there?” was the chief’s reply.

Dads spark joy when they create memories for the family like this. I found it especially meaningful given all that has been lost for these kids, and those like them, because of the pandemic. I can’t imagine they’ll ever forget how this tradition played out in 2020. It’s one of the things they’ll talk about at their dad’s funeral.

I mentioned four fathers worked together on creating this memory. One father was our son Michael. Who were the other three? They were the three firefighters who did the dirty work. You get a glimpse of them in the video. They appeared about the same age as our son, and I picture them with kids of their own.

Imagine the joy this event sparked in them. Every other time they drive to someone's home it's to pour water on someone's burning house, to minimize a tragedy taking place before the stunned eyes of the homeowner. To use water the way they did this day, to continue a decade-old tradition, must have sparked joy in them too.

What a contrast for them, using water to create joy, rather than using it to minimize tragedy. Creation vs. destruction.

Creating memories and sparking joy is really one of the great privileges of fatherhood. Does this spark any joy in your thinking about what memories and traditions you could create for your family, or for your friends? I hope it does, and that you take action.

If you’ve done anything like this, please tell me about it. I'd like to hear about the memories you've created.

There's more to come next Wednesday.  In the meantime, you can browse below through all 3 seasons and 67 episodes of You Were Made for This. Season 4 resumes September 9th.