153: Two Stories of How to Reflect the Character of God

We don’t need to ask hurting people “what can I do to help?” There’s another way to help that takes the pressure off us and the person we care about. It's to reflect the character of God in caring for others. Today’s episode gives two examples of this important principle we can use in our relationships. Keep reading to learn more.

A picture is worth a thousand words.

I saw two news photos recently about the invasion of Ukraine that gave me hope in the midst of this awful tragedy. You’ve heard it said that a picture is worth a thousand words. I’m not counting, but here are my words about these two pictures that touched my heart for the compassion and kindness they depicted. They also illustrate the relationship principle I talked about in last week’s episode, no. 152. I’ll explain that in a minute, but I’ll start with the photos.

Baby strollers left for the taking

The first photo is of a train station where Ukrainian refugees fleeing the Russian invasion of their country first arrive in Poland. On the platform where people get off the train, some unknown women placed empty baby strollers for the newly arriving mothers to take for their children.

I think it’s safe to say this was a spontaneous response on the part of these women to act upon what they first observed. They saw the news of millions of Ukrainians fleeing their country. I’m recording this near the end of March 2022 and the latest figures I saw were about 10 million people in Ukraine have fled their homes. They are mostly women and children; the men are staying back to fight in the war. The UN estimates 50,000 Ukrainians are entering Poland every day.

I also think it’s safe to say these Polish women reflected upon what this means for their Ukrainian counterparts. They’re imagining what life must be like for them. To leave behind their husbands, brothers, fathers, and even grandfathers to fight the invading forces, not knowing if they will ever see their loved ones again. They see the photos you and I see of apartment buildings bombed and reduced to rubble. If the war were to end today, what could they possibly return to other than smashed slabs of concrete, piled one on top of the other where their homes used to be?

No one asked these refugees getting off the train, “How can I help you?” I doubt if a committee was formed to design a care program with a catchy name and a clever acronym to assist these refugees. Instead, they put the ORA principle into practice. They Observed – Reflected – Acted.

The baby strollers the Poles provide seemed in pretty good shape and I wonder if they were recently purchased. Giving away strollers, whether their own possessions or newly purchased, was a sacrifice. But a loss so minor in comparison to what the refugees were giving up.

If you look closely at the photo, you’ll notice the baby strollers on the train platform are pointing in different directions, with no sense of order. Just like their lives that changed on February 24, 2022, when Russia invaded their homeland.

For the Ukrainian mothers, these baby strollers send a silent but powerful message to them that there are good people here in Poland. “They get me. They understand. In their nation’s history they have been invaded by Russia, too. Maybe I’ll be able to make it in this new country after all. At least my children and I are alive and with me. And there are some people doing what they can to care for us.“ 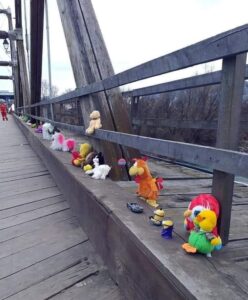 The second photo is of a gray wooden bridge near the crossing from Ukraine into Romania. It’s the photo you see at the top of the show notes for this episode. I’ll also have a link to it at the bottom of the show notes.

I’m struck by the contrast in colors in the photo. The sky is gray. The bridge is gray. But someone has placed bright, colorful stuffed toy animals on the side of the bridge.

The Romanians observed the same photos of war as the Polish women and the rest of us see. They also reflected upon the meaning of it all and the impact on mothers and their children leaving their homeland in Ukraine.

They imagined what it must be like to be them with frightened children under tow. The kids had to leave their prized possessions behind, but greeting them on the side of the bridge are colorful stuffed toy animals. Maybe this could be the start to a good beginning.

This gesture sent a message to the arriving Ukrainians, “These Romanians must be good people to provide these stuffed animals. They’re showing concern for my children. They understand kids because they must have children of their own. Maybe, just maybe, we’re going to be okay here after all.” The refugees saw the Romanians reflect the character of God.

So what does all this mean for YOU and me?

You and I won’t be expecting Ukrainian refugees at our doorstep anytime soon. But there is a relationship lesson we can learn from the Poles and Romanians.

It’s about the relationship principle of asking a better question than “what can I do to help?” It is to think about what you could do to best reflect the character of God in helping someone. And then do it.

It is about taking our eyes off ourselves for a few minutes and putting ourselves in the place of hurting people who are scared and dealing with a life-changing loss of one kind or another. We don’t have to look to fleeing refugees from Ukraine to find people like this. They’re all around us.

We can follow the example of the Poles and Romanians

How about the friend who had to put their dog to sleep? The neighbor who just lost his job. The woman you work with whose mother no longer recognizes her because of Alzheimer's Disease. The lady in your church whose husband left her after decades of marriage.

We can’t make up for these losses. But we can reflect the character of God. That part of God's character that hates injustice and evil. The part that’s kind and compassionate. The part that’s gentle. We can be like that for people.

How you and I reflect the character of God will be entirely different. It will be unique to you and me. What a privilege we have in doing this, whether it’s giving away baby strollers or colorful toy animals, or something else.

Since we are created in the image and likeness of God, when people are in need ask the Holy Spirit what you can do to best reflect the character of God to them. And then do what he tells you.

As always, I’d love to hear any thoughts you have about today’s episode.

In closing, I hope your thinking was stimulated by today’s show, to both reflect and to act that’s consistent with how God made each of us in his image. Because when we reflect his image well, we will feel the joy of being and doing what you and I were made for. You Were Made for This.

That’s it for today. In the meantime, spread a little joy in your relationships this week as you reflect the image and character of God. Until we meet up again next week, goodbye for now.

Past Episodes of You Were Made for This

Photo of the Ukraine/Romania bridge

You Were Made for This is sponsored by Caring for Others, a missionary care ministry. We are supported by the generosity of people like you to continue this weekly podcast and other services we provide to missionaries around the world.